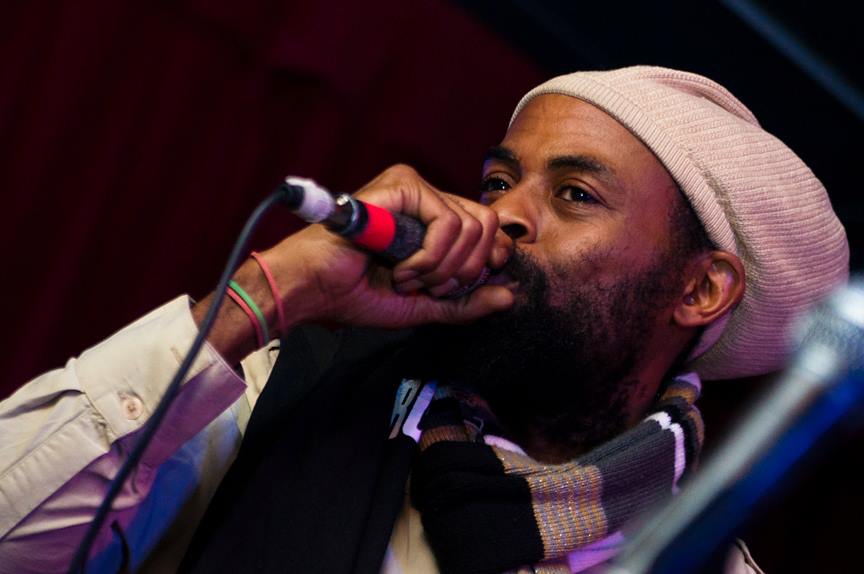 This post features a brief interview with Grap Luva; exceptional beat-maker, INI member and younger sibling to big Brother, the Chocolate Boy Wonder Pete Rock. During this confab, he takes us back to two shows…

2] His memories of the night, alongside his actual Soul Brother #1 Pete Rock and the Super-Producer Marley Marl, when Heavy D rocked up to the studios of WBLS, at the very end of 1989

As a matter of context, I was the person that supplied the edits on the long-player UK Rap classic by The Nextmen in 2000. I was pals with Brad Baloo who had moved into my flat ‘Up in Brixton’, South London. Inevitably I became involved in the embryonic stages of that album being created. The groundwork for the Amongst the Madness LP was laid down in the flat I had, with a number of MCs laying down their original bars in the combined living room/ studio space, before being taken to a larger professional studio.

Sadly, in 1999 when Grap Luva arrived in my living room to record his rhymes for the Break The Mould cut, I was outta the country. I never met him, but always respected his output both as an MC and as a beat-maker; Early on with the Pete Rock & CL Smooth tracks [like On & On with his older Brother Pete beatboxing, or The Basement alongside Deda and Rob-O] from the duos debut LP. Then sometime later there was the Beats & Rhymes track, he was behind the boards on the J-Live [My favourite track ‘Them That’s Not’] Best Part LP, the Redefinition recordings, that Nextmen track ‘Break The Mould’ and of course as a member of INI.

I recently discovered that Grap was up in the studio during an In Control Show that I’d picked up last year. It was from the final days of 1989 and featured Heavy D in the studio, alongside Pete Rock, and of course, the Engineer All-Star Marley Marl. I wanted to ask Grap [Given the title, a condensed version of his full name, BY Heavy D] about his memories of that night, and his recollections of the Stretch & Bobbito Show when he freestyled along with his INI crew in April 1996.

I reached out to Grap, this is what he had to say…..

What are your first thoughts when you hear a classic show like this again ?

Legendary man, Marley Marl, Pete Rock, Marley was working with the illustrious Mr Magic, before ‘BLS pulled him in for his own radio show. But Marley is a legend, so just rockin with Marley was mad fun. There’s a couple of shows where you hear me talkin, this was during the period when I was part of the show staff, answering the phones, taking calls, and doin the shout-outs for the In Control Show, that was dope.

Do you feel sentimental that we don’t have that same energy from the world of Hip-Hop any longer, and who do you check for in 2020 ?

It’s disappointing that we dont have those type of dope radio shows any more of course and yeh I do miss that element of taping from the radio, but I enjoy the new stuff, the links to DJ mixes etc. I don’t just listen to Hip-Hop, I listen to all types of music so I check for DJ Jon Doe and Eddie Meeks from Southern Vanguard Radio out of Atlanta, and Bobby Bob from Spain with his Words and Sounds radio show, amongst others.

You don’t say an awful lot, but you were in the studio for this show alongside Hev, was that a regular thing [what age were you at the time] and would you be fortunate enough to hang in the studio most weeks ?

I’d just roll with my Brother cos he brought me up with him, and being on the show with Hev was dope. That’s my big cuz, that feelin was really dope. I was probably 15/ 16 at the time with Marley and Pete so it was really dope. It was a regular thing til I went to college, just for a period during 88/ 89, and I was in High School so yeh, it was cool.

How was it discovering the news that your big brother was going to be on a radio show with such a notable DJ like Marley Marl, and what are your favourite memories of artists and experiences going to the station ?

We lived together, we shared bunk-beds, so naturally I heard first hand, and cos it was Marley Marl, it was very big news. I was very happy and excited for him. When I did meet people, I was grateful to meet them although it didnt happen too often. Eric B & Rakim, that was dope to meet them, Tragedy Khadafi, that’s like my big bro. I think one time he came up there, he mighta been runnin from the police, cos he was sweating, im not sure but that was crazy. I remember DJ Hot Day from Queensbridge comin up there too.

How long was Pete doing the show for and at the time, did you recognise the importance of your Brother’s SKILLS behind the turntables, and see that what he was doing was progressing the world of Hip-Hop music back then ?

Im not sure, it may have been 2 years, maybe more, but of course they got back together and did Future Flavas on HOT97 and that rocked out for a few years too. Of course, him and Marley were the first ones to do the blends, with the RnB songs and the Hip-Hop beats underneath. I believe that was 1988, and I think they were the first ones to do it. It can be contested if somebody can find a Ron G tape or a Kid Capri tape from earlier than that, let me know. But that was the first place I ever heard RnB and Hip-Hop being mixed the way it was being mixed. Pete would be playing the Hip-Hop beats and Marley would mix in the RnB or vice versa. Or Pete would do both.

Any other thoughts that pop into your head about that night ?

I barely remember it, I do remember it being an interesting night and because of your recording, I’ve been listening to it again, it’s been dope.

What are your first thoughts when you realise people all over are still listening to and enjoying Grap Luva, this time on a radio show from over two decades ago. And do you have a copy of this show?

I’m very humbled by that, it’s very dope and very humbling I really appreciate it. And no I dont have this show. It wasn’t Stretch & Bobbito, I believe it was DJ Rizs’ show, I dont ever remember rhyming in front of Stretch & Bobbito. I was invited later on, but by that time, I think they had seperated, and I went with King Sun, from the BX. I brought my SP1200, and King Sun was freestyling and rhymin over those beats. And BTW, he had done a ‘Best of’ cats who came to the station and played their beats, and I came 2nd, so I was appreciative of that.

NB: Grap did appear on that show, as you’ll hear. He had simply forgotten about this performance, alotta time has passed since then, obvs

How did things change within the Hip-Hop community after you started having some success, and do you recognise just how respected you are across the planet to this day ?

Naturally, people dig and respect artists and things raised up a little bit, but it didnt change that much, but it was cool. And no, I think because I havent been around the world I havent seen how people react to me, but im appreciative as I see it online, and I give praise to the most high for that, but back then I didnt know at all. I was just a young kid findin his manhood and just growing up, but as we never toured we never really recognised the impact until we went to London on that trip in 1999.

Regarding your general experiences as an artist, do you feel fortunate, nostalgic or do you feel that the time has passed and it is what it is ?

I feel blessed, I dunno if I feel nostalgic, but we never really got to officially put the album out, so THAT needs to happen before I can actually say that ‘time has passed’.

Any other memories of the period, of tours, live shows, and did you appear on any other radio shows/ do any promos for shows ?

We did a few spot dates, no real tours, like I said, we did the DJ Riz show on 89Tec9, but things didnt really pick up for me until after the INI situation. While we were in it, we didnt have alot of touring going on, we did go down to Jack the Rapper, I believe it was in 96, got to meet 2Pac, that was cool. We ended up linking with Pharcyde, stuff like that was dope. We did a promo for HOT97, we were on Battle of the Beats with Angie Martinez and we did a promo for Red Alert, and I think we did something for Flex.

Big thanks to Grap Luva for taking the time, and to Jason Armitage for the tape.