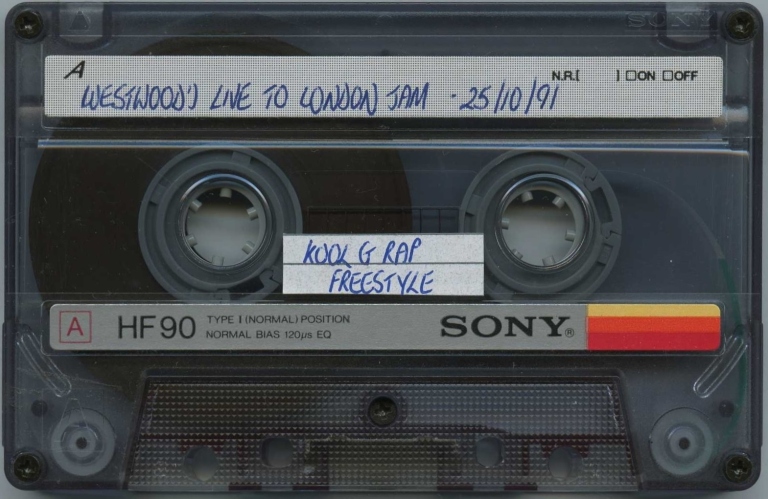 RRR post these shows for those that enjoyed the broadcasts at the time, for those of us that were driving to jams and carryin on in the back of the car en route to a jam of their own. It’s for those that blasted these iconic tunes on the radio, as they were heard, the first time round, as the musical accompaniment to our weekends ! These shows are for the people that kept hold of those tapes and pop in an old dusty one when the mood takes them.

We also care about the youth, so we share these as a form of education for those younger generations that wanna discover the Hip-Hop that marketing men and women the world over talk about. Hip-Hop and Rap in its purist form is not about histrionics, incongruous gossip or bitch-move drama.

As well as broadcasting the sounds of Hip-Hop since the mid-80s, Tim Westwood was always hugely in favour of bringing the party ‘To the Streets’ and by the time October 1991 rolled around, the Big Dawg of British Rap radio had already been playing club sets for years and was ‘guaranteed to rock a party’. This tape [from the days of The Arch in Vauxhall, and The Slammer in Gravesend, two UK venues synonymous with Westwood and the Rap club circuit of the period] was generously supplied by ex-label and industry head, Mr Lawson, and is proof of such. The Live to London sessions started on the Capital Rap Show around the late 80s and continued for years, with Tim creating a direct platform for American artists to perform in front of British audiences for the first time, in London and across the UK, promoting their releases, and their identity. These sessions went live to air on 95.8 FM for segments of each Live to London Capital Radio broadcast, the actual parties ‘rocked on’ until 5am. This session starts with bangers, goes into some Hip-Pop in the form of O.P.P. and Fu-Schnickens, before launching into an underrated Ragga set. Tim was a huge proponent of Ragga and Dancehall, dropped it in virtually every set, and probably does to this day. He naturally played the prevailing ‘riddims’ of the time, but listen out for the ‘dub-plate specials’ he was blessed with by artists like Cutty Ranks, Mad Cobra, Daddy Meeky & Little Meeky and Daddy Woody. Advocating Tims position and confirming that ‘Westwood, He Run The Road’ on one selection. The iconic and faultless ‘Yush’ promo by Mad Cobra kicks off the Ragga section of the set. Remember, these promos and ‘dub-plates’ were never released to anyone other than Tim, on albums, CDs, anywhere. He talks more about them in the clip below too. Towards the end of the set you can warm to the intimidating menace of Kool G Rap live on stage, performing a short-set to promote a full concert at Hammersmith Palais. He spits a few bars over Peter Piper & Paul C beats and the tape ultimately comes to a close with some more ’91 classics.

Tims delivery on the mic is absurdly entertaining throughout this tape, most notably as he proudly announces Juice Crew Manager Fly Ty is in the building. His delivery of shout-outs to people from other sound-systems is also golden, as is the moment that he jumps to Ice Cubes defence during Fuck Compton. As well as seminal lines like ‘As the Countdown Continues’, ‘Kicking the Vibes Downtown’ and how he describes his set as ‘The Peoples Choice’. The terms for the different people in the dance are gems too: Brixton-ites, Ghetto-ites, and Punany Mechanics for starters.

If you want to catch some immediate throwback goosebumps, go to 57:57 to hear Tim drop the classic Poison by Kool G Rap and then the Live to London anthem, Letter To The Better by Master Ace. DJ Polo and G Rap are wandering around this South London dance, and informed over the mic to ‘Leave the Skins Alone’. More than once. The ‘Original Marley Marl Armshouse Lick’ is dedicated to DJ Polo, affirming its place as a bonafide Live to London anthem. Tim then tells Polo ‘God Damn I Told You’ as the whistle posse blow feverishly and the crowd screams along, fundamentally, this tape wholly captures the energy of those parties. Again, big thanks to Mr Lawson.

If you dont like Westwood, then you probably shouldn’t be listening to this. Because that would make you a hypocrite. For the rest of us with a less blinkered attitude, it’s a different story, this is one of the gnarliest Live to London sets that RRR has ever laid ears on, enjoy…..